Helion Prime : “Terror Of The Cybernetic Space Monster” CD 31th August 2018 AFM Records. US Prog / Heavy / Power Metal band. Since I already used the cover art for the first single I decided to use one photo that simply resumes what the band is. Like few musicians on the red planet Mars, Jason Ashcraft  is keeping the image of a sci-fi music band. So this photo fits pretty well.

The album cover made by Marc Whisnant keeps the monster from the debut album giving that one another open door to your imagination. It’s flashy always explosive with colors and details , it is just brillant artwork. Mixed and mastered at LSD studio by Lasse Lammert (known for his work with bands like Alestorm and Gloryhammer), you have a perfect album to enjoy and is really on the time of what modern bands give you today.

As many have seen and heard the new singer Sozos Michael brings another dimension to Helion Prime ‘s style. Jason has decided to “evolve” with his creations and for many it will be kind of a surprise. While I share the same as all of you the feel the first album was a massive explosion in the Metal world, listening to this album I had confusions about what the new musical direction it was supposed to be. The band is categorized as Power Metal , when in fact it has Progressive songs as Heavy ones.

You will jump from Helloween to Yes to Dream Theater to Iced Earth… Sometimes Heavy riffs, sometimes classical intros. In fact this album regroups all the Eighties and Nineties tunes that makes this album like a dedication to the Heavy Metal we love today! For sure each song has a different approach from the lyrics to the music and it can be a bit unstable for you who are used to hear one album with the same line from start to finish.

Here is the second single the band is offering to you that will give you a hint of what to expect :

This kind of title gives credit to the singer ‘s voice while some more heavier songs don’t really fit his range. Each person has an opinion and I read on Utube that lots of people who loved the first album are kind of disappointed. But believe me this album has a great spirit and will stick to your mind for a while. Musically it is well written and those musicians are top notch ones.

Some may say it becomes mainstream already some will call this an evolution of creation and it is certain that it makes a big gap between the first album and this one. The most important is to listen and dig the tunes as the lyrics and plunge into this universe. Nine songs with power and feelings to catch your heart and support once again this amazing creation.

The Last song , the album title “Terror Of The Cybernetic Space Monster” , is a special one with guest singers (Males and Females) to give you a burst for the final and really describe this monster pretty well. I must admit some singer in this song could have been chosen for this project. I can tell you it is one of my favorite such the diversity of vocals and powerful tunes, is getting the Cherry of the cake. 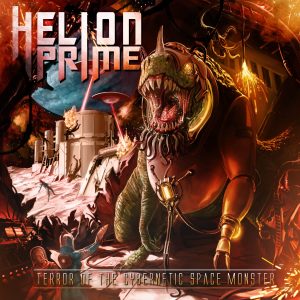 About Editor
The Metal Mag was born in 1998 in England, the wish to support Metal bands in the world. A magazine is readable for free with live video interviews and link to partners.

This site uses Akismet to reduce spam. Learn how your comment data is processed.